I’m sure you can agree that, at the end of the day, you don’t always feel like cooking a big meal – especially during the week.  I hear ya, we’re in the same boat.  On the flip side, I most definitely do not want take-out.  I just want something simple, but wholesome.  I’ll even settle for semi-wholesome.  If I can integrate at least one vegetable in the mix, I feel like I’ve accomplished something.

And that’s probably why I make nachos for supper at least twice a month.  Maybe three times.  Don’t judge.

The way I see it, nachos are semi-wholesome.  I load mine with red peppers, green onions, black beans, corn, pickled peppers, tomatoes and sometimes, avocado.  Vegetables for the win! 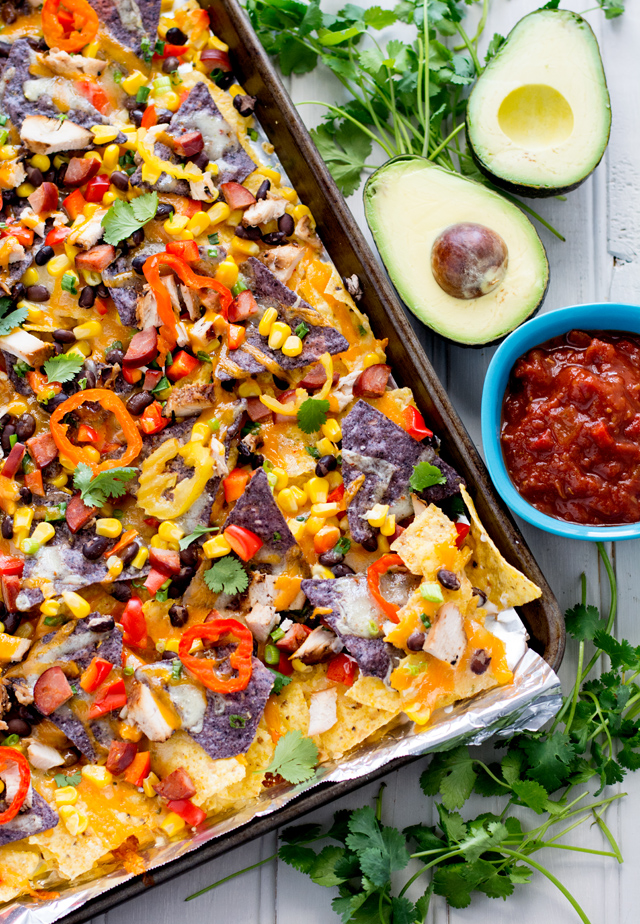 Nachos are also a super easy way to clean out the fridge.  Being a food blogger, I always have weird odds and ends hanging out in there.  Can any of you other bloggers relate to this?

Take last week for example.  I had two open bags of Que Pasa corn tortillas, half a ring of Chorizo sausage and black beans left over from my Tostadas.  I rummaged a little more in the fridge, and found a whole chicken breast from Monday’s lettuce wraps.  Nachos to the rescue.

Have you ever made nachos in the oven?  It’s the only way to go!  The cheese melts nicer, the chips get crispy instead of soggy, and you can make mass quantities at one time.  And when you’re making nachos as a meal, you need mass quantities!

Amigos, there's no need to measure anything! Add as much or little of each as you want. Use this "recipe" as a guide to create your own sheet pan nachos.