Morning Buns are the sophisticated cousin of everyone’s favourite, Cinnamon Buns.  The dough for Morning Buns is enriched with eggs and butter, slowly risen in the fridge overnight, rolled up with cinnamon, brown sugar and slivered almonds, and baked in a muffin tin for perfectly portioned rolls. 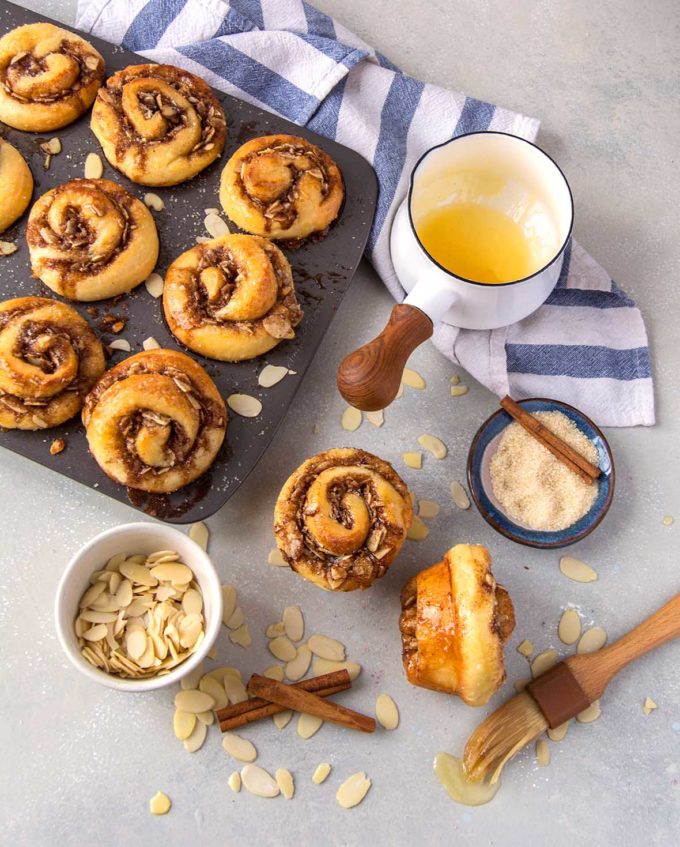 What, you might ask, is a Morning Bun, exactly?  They’re similar to cinnamon buns, but typically made with a croissant dough. That means, lots of buttah, and lots of waiting while you laminate the dough (folding and rolling to create layers of dough separated by butter).  Morning Buns were made famous by Tartine Bakery in San Francisco, but they originated in Wisconsin.  I was able to get my hands on one from Tartine and it was buttery, flakey, and slightly citrusy.  Purely heaven.  Ever since then, I’ve wanted to make my own at home, but don’t always (pretty much never) want to make croissant dough, because it takes so darn long to be ready to use. 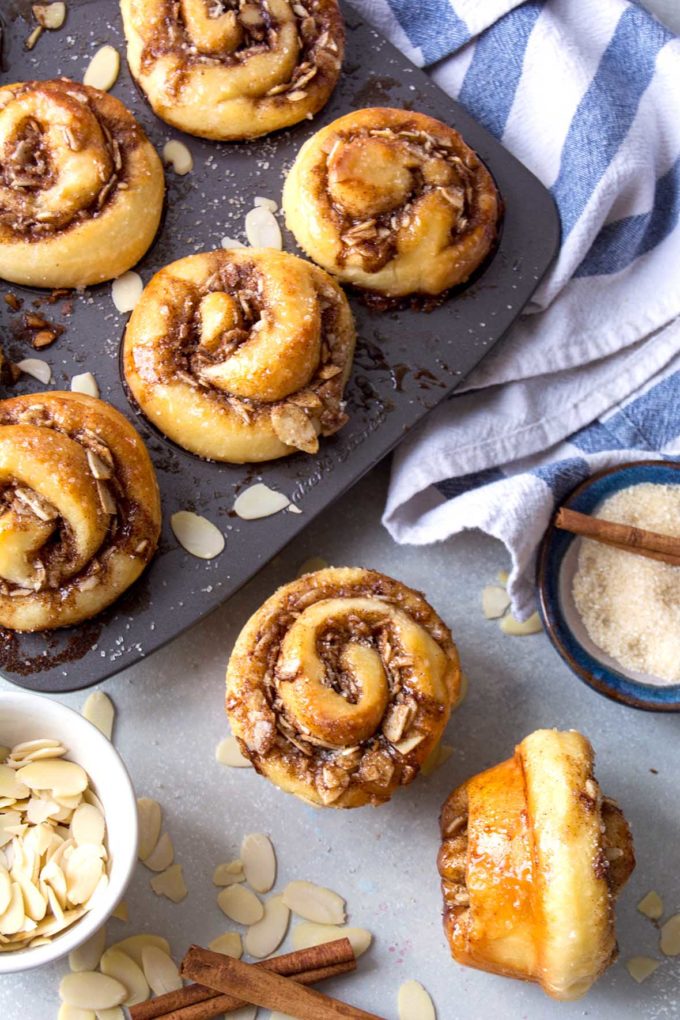 So when a video from Bon Appetit appeared on my Facebook feed with an easier way to make Morning Buns, sans the croissant dough, it instantly grabbed my attention.  The first time I made the buns as written by BA, except I used all-purpose flour because that’s what I always have on hand.  Instead of using a croissant dough, this recipe employs an enriched dough, like Brioche, which means it has a higher fat proportion than a typical yeasted dough.  In this recipe, you will use eggs, butter and whole milk, which result in a gloriously rich, buttery (obviously), and very tender dough.  A tradition Morning Bun would use a laminated croissant dough, and have flakey layers, but this version has a soft and chewy texture, similar to cinnamon buns – but better!

As for the filling, just cinnamon and sugar wasn’t cutting it for me; it reminded me too much of a basic cinnamon bun.  After perusing my pantry, I decided to sprinkle on some slivered almonds.  The slight crunch they offered paired perfectly with the fluffy buns, so I made one final batch with the almonds on the inside, and the rest is history.

I’m not lying when I say I’ve been eating Morning Buns every day for the last 3 weeks or so.  Sticky, sweet, tender, crunchy; these Morning Buns hit on so many textures, it’s no wonder I’m absolutely addicted to them.   Step aside cinnamon buns, there’s a new morning pastry in town and she goes by the name of Almond Morning Bun.  Perfect for brunch during the Holiday’s or any day, really.

One thing to keep in mind when making these Almond Morning Buns, is that you should start the dough the evening before you plan to bake them, as the dough is required to rise in the fridge overnight.  The morning of baking, you will need to roll out the dough, prepare the filling and chill the dough again before the buns can be cut and placed in the muffin tin.  Once in the tin, they need to sit and rise at room temp.  I’ve been joking around that these should actually be called “Afternoon Buns” because I’ve never actually eaten a batch fresh in the morning.  This is attributed to me sleeping in instead of getting up early to bake off the buns.  Regardless of the time of day, these buns hit the spot! 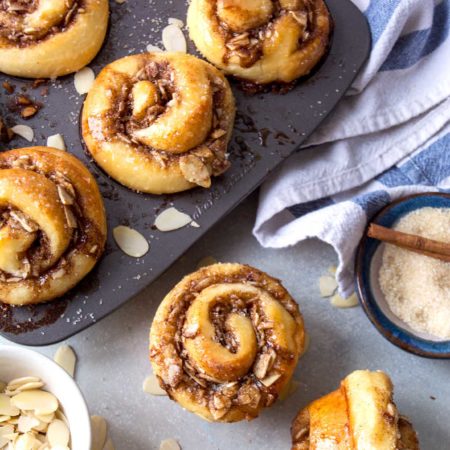 I highly advise that you read through this recipe IN FULL before you start baking. This recipe requires a rest in the fridge overnight, then some chilling time again in the morning once the dough has been rolled up.
Print Pin Rate
Course: Breakfast
Cuisine: American
Keyword: Almond, Cinnamon
Cook Time: 25 minutes
Overnight Resting: 8 hours
Servings: 12 servings

*I use instant yeast so that I don't have to wait for the yeast to proof in warm milk with honey - I can just add it right to the flour and start working it. If you are using dry-active, you will need to proof the yeast for about 5 mins in the warm milk and honey before adding the flour.
Did you make this recipe?Mention @culinarycool or tag #culinarycool! 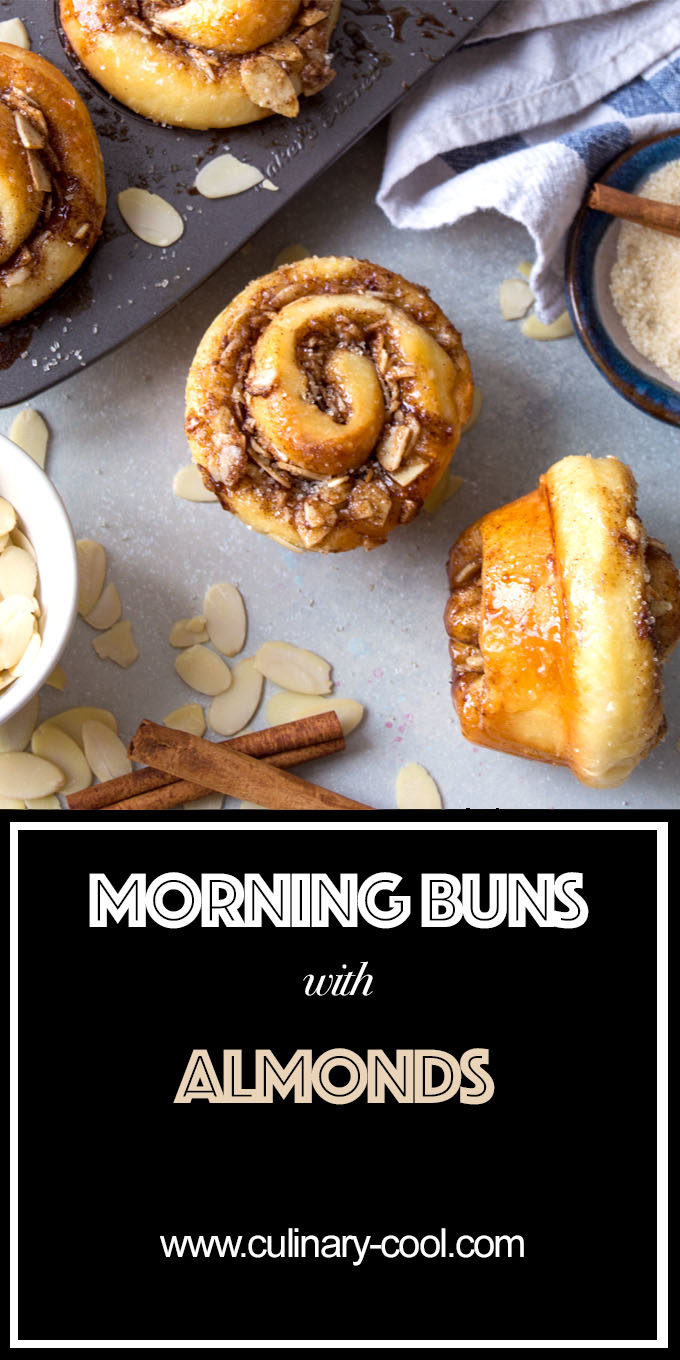